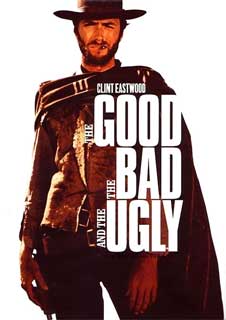 I Can’t Believe You Haven’t Seen…The Good, The Bad & The Ugly

A bounty hunting scam joins two men in an uneasy alliance against a third in a race to find a fortune in gold buried in a remote cemetery. In the last instalment of his so-called "Dollars" trilogy of Sergio Leone-directed "spaghetti westerns," Clint Eastwood reprised the role of a taciturn, enigmatic loner. Here he searches for a cache of stolen gold against rivals the Bad (Lee Van Cleef), a ruthless bounty hunter, and the Ugly (Eli Wallach), a Mexican bandit. The final instalment in the cycle commonly known as the "Dollars" trilogy with music composed by Ennio Morricone.